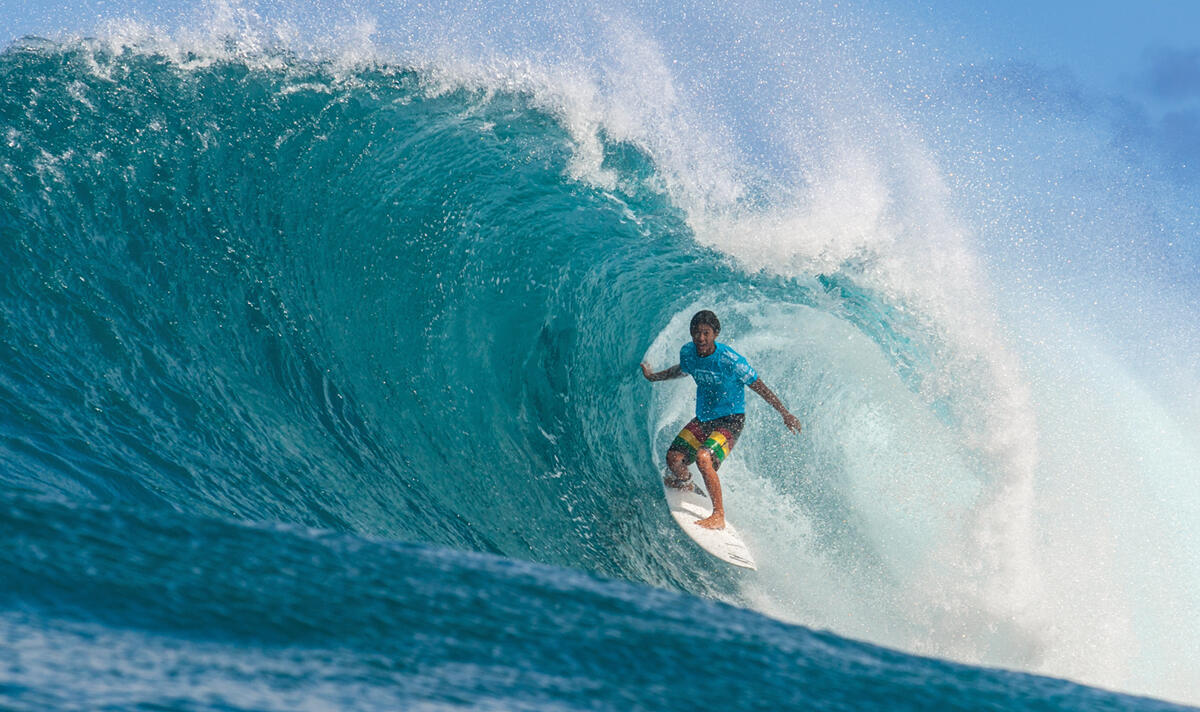 Last week, the surfing world watched as John John Florence continued his blistering approach to 2016 as the North Shore local dominated the opening event of the Triple Crown at Haleiwa. Not only is John possibly the most well-liked surfer on tour, he’s also the most talented, as evidenced by the fact that he’s already won this year’s title before the season is over. And who can forget his now-famous win at The Eddie earlier this year? There isn’t a soul who can touch John this year, and his win at Haleiwa proved it. When he’s feeling good, when he's at home, and in a grove, John gets business done. And the next item on his to-do list is the second stop of the Triple Crown, Sunset Beach.

But first, a bit of backstory on one of the North Shore’s most sacred waves. There’s not a pro surfer alive who doesn’t have a horror story about Sunset Beach and its infamous West Bowl section. Year in and year our, Sunset continues to assert her dominance on the North Shore, reminding even the most accomplished of surfers of the definition of Hawaiian power. While many of today’s top pros typically don't spend their time freesurfing (most young pros opt of waves like Off the Wall, Pipeline, and Rocky Point) Sunset continues to demand respect. Think of Sunset Beach as your older, grizzly uncle. He’s quiet, has a violent past, and you don’t want to cross him.

Sunset is truly a venue for the committed, so when the event opens up its holding period on November 25, expect to see grit and determination in the eyes of competitors as they attempt to tackle one of the most complicated and potentially devastating waves on the planet.

As one of the last setups in the Seven-Mile Miracle, legends of Sunset’s prowess abound and even predate the 19th century, making it one of the premiere waves in surfing lore. As early as the 1930s and ’40s, men forged of iron who rode goliath wooden boards tested their mettle at Sunset’s unforgiving lineup. By the 1960s, with the invention of an updated craft complete with fins and foam, riding Sunset Beach became the pinnacle of a surfer’s existence and Hawaiians like Jeff Hakman and Barry Kanaiaupuni etched their names and unforgettable styles in the waves face.

By the ’70s and ’80s, the Australian Bustin Down the Door crew, followed by Derek and Michael Ho, made their presence felt. And in more modern times, the likes of Andy Irons, Joel Parkinson and CJ Hobgood have proven that they can keep calm and thrive amid the maelstrom that is Sunset Beach. Of the young crew, it’s local boy Zeke Lau who seems to have the best hold on Sunset.


“Surfing Sunset Beach has been second nature to me,” said Lau. “I didn't try to put time in there or work really hard to figure it out. It just happened over time. I grew up surfing here my whole life. There will be no pressure. It will be just like another day of surfing for me.”

But can John John continue his march to the podium? He’s clearly ready and relaxed, (he's also a past champ at the event) two traits that often signal a win for him. ““I’m going to do the same thing I did at Haleiwa,” he told Guerrero. “Sunset is right next to my house. I’ll go, I’ll enjoy being home, and I’ll enjoy surfing with my friends. That’s what I did here, and it seemed to work pretty well. I’m going to try to keep that same formula.”