Swimming With Sharks May Be Key To Saving Them Standing on the boat, you take one last deep breath before you plunge into the great blue depths of the Pacific. This is it, you tell yourself, as you inch closer to the edge. In the distance, perhaps 10 to 12 meters out, you can see the distinctive fin of the shark moving closer to you.

The water is warmer than you expected but your heart is pounding. Yes, you're more than a bit terrified, but your shark tour guide assures you that the graceful sharks slowly meandering nearby aren’t aggressive. As the creatures sway to a fro, gliding through the blue, you can’t help but be mesmerized by their beauty. After a few moments, it dawns on you: you’re no longer scared; you're captivated. While free diving with sharks may have sounded suicidal, you’ve realized just how magical these historic creatures are. You had to see it with your own two eyes to understand. And you’re not alone in your revelation either.

While movies like Jaws have terrified people the word over for decades, droves of adventure seekers have begun getting up close and personal with sharks in supervised free dives over the past few years. North Shore icons and shark enthusiasts like Ocean Ramsey not only marvel at the beauty of sharks when they encounter them on a regular basis, but make a point to study their movements and patterns and share their love and appreciation to sharks to all. By spending time with these creatures, she better understands their movements, nature, and patterns, all of which makes her better equipped to be an advocate for their protection. 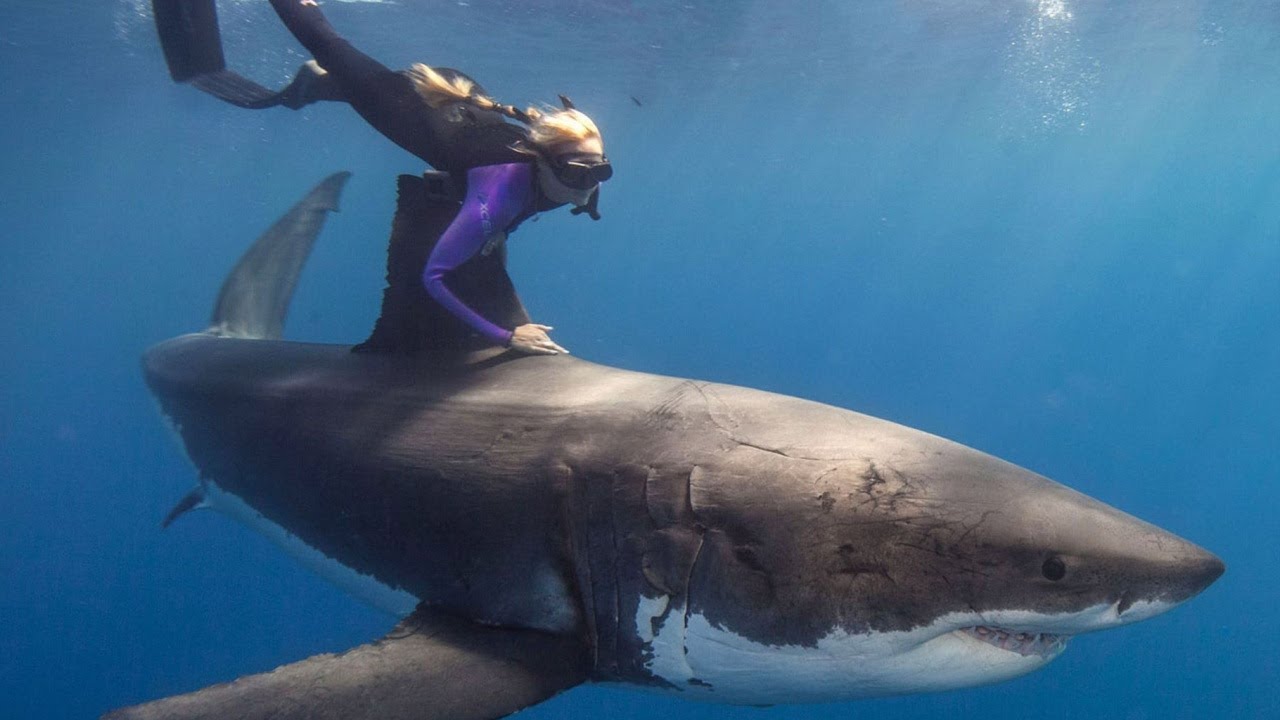 “While swimming with sharks is a thrilling and inspiring experience, my interaction with sharks is absolutely driven by my greater goal to advocate shark conservation,” said Ramsey. “Many people fear sharks and have unfortunately only seen them portrayed on TV and in films as mindless man-eating machines. In truth, sharks are intelligent, calculated, and generally very cautious about approaching humans. More importantly, sharks play a vital role in maintaining a healthy ocean ecosystem and are being over-fished to the point of extinction.”

Every year, tens of millions of sharks are killed for their fins, which is considered a delicacy in many countries. Conservationists are dramatically concerned about the overall health of the creatures and how their decimation—as the ocean’s apex predator—would affect other marine life. Long story short, while the stigma is on sharks as deadly predators that we should fear, the real hunter causing the most harm is mankind.

Ocean Ramsey isn't the only one calling for the protection of sharks. Other advocates, like Hawaii's Mike Coots who survived an attack that claimed one of his legs, has worked with a myriad of organizations and even spoken to congress to raise awareness about this issue and pass laws that make it more difficult to fin in US waters.  “If I can bring more attention to the cause because I’m a shark attack survivor, then that’s a good thing,” said Coots. “We need to protect them.”

According to Ramsey, the key to protecting shark populations from dwindling lies in understanding them and realizing that they’re not the killing machines that Hollywood would have us believe. “In the end people will only protect what they love, and only love what they understand.”

By Anonymous on December 02, 2020
how does my daughter and I arrange to do this? We are staying at turtle bay resort in September 2016.