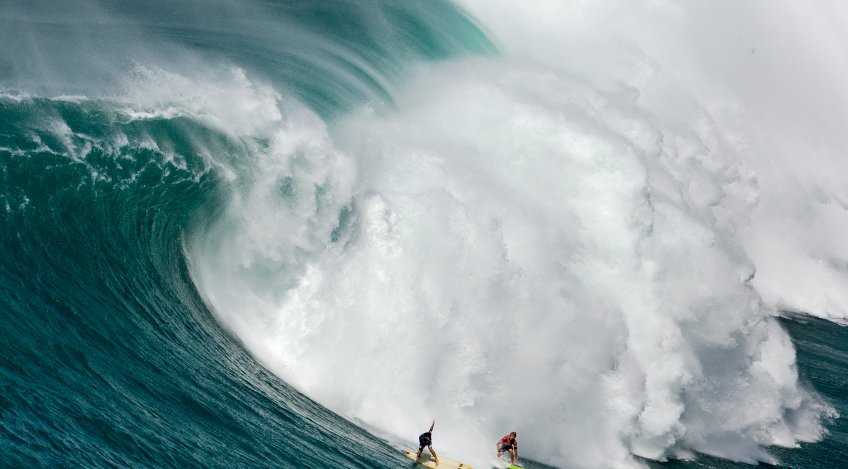 Last February, the world marveled and cast their collective attention to the North Shore of O’ahu. With 40-foot-plus walls of water marching through the lineup at Waimea Bay, the Eddie—surfing’s most prestigious big-wave event—was given the green light as competitors in the invite-only contest pushed themselves over the ledge and raised the bar in big-wave surfing. And after a close call that nearly saw the event cancelled for the year, news broke late last week that The Eddie would run this year, if conditions permit.

Without a doubt, the Quicksilver Eddie was one of the most watched and gripping events ever in surfing. While those who saw it all unfold live on the webcast or on television certainly gasped at the carnage that ensued from the repeated wipeouts, those lucky enough to see it all go down from the beach were left with an indelible memory of professional surfing in its finest form. Now, nearly a year removed from last year’s event, I still get chicken skin when I replay my own personal highlight reel in my head.

LEARN MORE ABOUT THE EDDIE HERE

For more than a decade, I worked at Surfer Magazine and consider myself lucky to have been sent to far-flung locations to drool over perfect waves. I grew up on the Outer Island of Kauai watching the likes of Andy and Bruce Irons gracefully tame the meatiest of waves. But in all my life I’ve never seen anything akin to what went down at last year’s Eddie. From the safety of a grassy yard overlooking Waimea, I could see the sets race toward Waimea, menacing and powerful enough to easily drown the hardest of hellmen in the lineup. As the waves made their way over the reef and lurched to hieghts of 40 feet and beyond, the crowd all around me screamed. And I mean that literally. They screamed. In the beginning, they whistled and hooted. But after the glow of the morning wore off and the death-defying wipeouts abounded, the mood changed. Now, when the sets, which seemed to crest somewhere in the stratosphere and broke with enough power to cast spray into the depths of Waimea Valley, we all pleaded: Don’t go! Not on this one. Please don't go!

But they went. Again and again they went. There was no pulling back on this day.

And if a surfer like John John Florence, Mason Ho, Kelly Slater, or Clyde Aikau made the drop and connected a wave through the bay, it was nothing short of a miracle. It was the best of surfing; hell it was the best of sports. Man vs. Nature. So when the news broke earlier this month that the event may not run due to a disagreement between the Aikau Family and Quiksilver (the event sponsor) it was a definite downer. But, thankfully, the family and Quik have come to an agreement and the event will run, if the deadly conditions permit.

Last week, as has been tradition for decades, the opening ceremony was held at Waimea, with the invitees participating in a group paddle-out to pay homage to the late Eddie Aikau, whose memory and legend serves as the spirit of the contest. “We are proud to see the tradition of The Eddie continue without interruption, a testament to our respect for Eddie Aikau, the Aikau family, the Hawaiian people, and the community at large. We are very grateful for the efforts and support of the Aikau family and the World Surf League under the leadership of Paul Speaker who have all worked very hard with our team over the past few weeks to come up with a solution,” said Pierre Agnes, Quiksilver’s CEO in a statement to the media. “Consistent with Quiksilver and the Aikau family’s wishes, we are pleased to confirm that the same stringent condition requirements we instituted when we inaugurated The Eddie 31 years ago will continue this year. We have every confidence that WSL’s greater involvement in the event this year will only improve The Eddie’s reputation as one of the world’s premier surfing contests.”

“This is a really special day for all of us, the Aikau family, to really be smiling a lot… We’re really proud to announce that yes, we’re going to have an Eddie big wave event this year,” Clyde Aikau told Hawaii News Now. “I think what’s real important is that the sponsors finally realized that what is important to this family is larger than all the money you could offer the family, and larger than almost anything, trying to preserve what Eddie Aikau is all about, his legacy, saving lives, helping people is what this family is all about.”